The EU Must Shift Out of Neutral in Its Enlargement Strategy: Championing Liberal Values Means Choosing Sides

Home The EU Must Shift Out of Neutral in Its Enlargement Strategy: Championing Liberal Values Means Choosing Sides 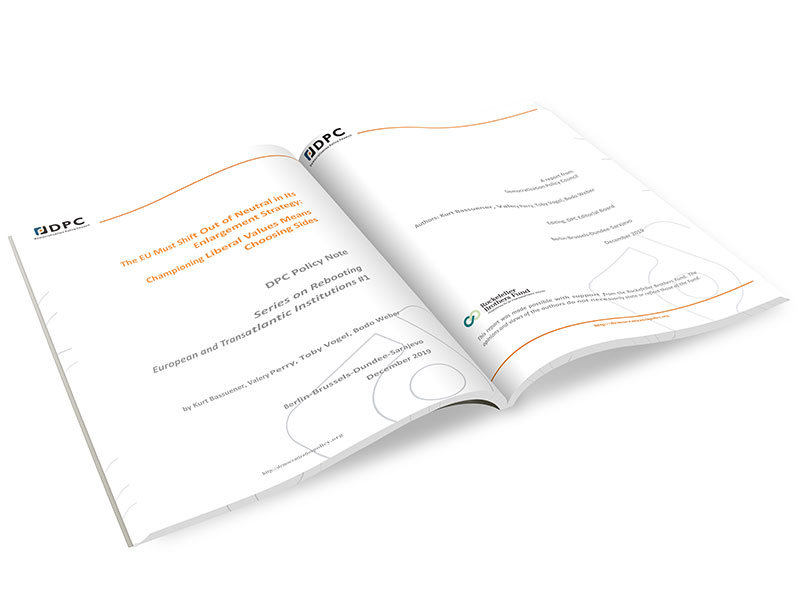 The EU Must Shift Out of Neutral in Its Enlargement Strategy: Championing Liberal Values Means Choosing Sides

On October 17, 2019, French President Emmanuel Macron once again pre-empted the launch of European Union accession negotiations with North Macedonia and Albania, forestalling them until further notice. His move was only tenuously linked to the individual merits of either country. Its real rationale was evident at the time and came into fuller relief with his subsequent interview with The Economist: Macron halted enlargement to force other member states – Germany in particular – to engage him on his ambitious – but still only lightly sketched – agenda to reconfigure the EU.

Immediately prior to the November meeting of the EU’s General Affairs Council, France released a non-paper that underscored that the enlargement halt was not really about enlargement at all. The non-paper was rife with contradictions and redundancies. Its main proposed innovation is a rejiggering of the enlargement policy into seven sequential phases. But the document also demonstrated a worrisome elite orientation, and was void of reference to or grounding in the EU’s foundational source code: the primacy of liberal democratic values and standards. This portends ill for Macron’s vision of the EU more broadly.

The non-paper’s focus is on delivering “tangible benefits” in economic matters. Despite the EU’s recent embrace of the term “state capture” and a new focus on corruption, these terms are absent from the French text. In essence, the non-paper proposes throwing more resources at entrenched elites in the countries of the Western Balkans, to rent social peace for them – and a predictable status quo for the EU.

Far from being a sideshow, the struggle for EU foundational values is and must be central to the problems in the Western Balkans today. The illiberal challengers Macron cites – China, Russia, Turkey – are all heavily and increasingly engaged in the region.

While solidarity among the other EU members in response to Macron’s move is laudable, the default inclination seems to be to finesse differences, and to concede an enlargement approach based on minor, largely cosmetic adjustments. This would mean to let a good crisis go to waste, both in terms of a long-overdue recalibration of the EU’s enlargement strategy, as well as orientation toward an equally necessary, but still uncharted, recalibration of the EU to face the internal challenges of nativist illiberal populism, yawning inequality, and the climate emergency.

DPC recommends a different course to EU member states committed to enlargement and the EU-wide reinforcement of liberal democratic values, at a time when they are challenged both within the Union and from east and west. This does not require any major changes to mechanics, mandates, or procedures, but rather a philosophical shift in approaching the countries of the Western Balkans. The 2015-17 breakthrough in North Macedonia demonstrated two things: a) that the EU’s institutional default setting has for too long been on the side of illiberal elites; and b) the reality that in the expansion of a values-focused EU in the Western Balkans, citizens – not elites – are the Union’s real allies.

1) Instead of taking the low road and simply restarting the enlargement policy with cosmetic changes, EU member states ought to take the opportunity to assess the process seriously and self-critically – with criticism of not just the WB6, but of the EU and its member states. The Council should commission an external diagnostic analysis of enlargement in the Western Balkans to date, to understand why genuine reform has been so shallow and lackluster, and with particular attention to the adherence to foundational liberal democratic values (i.e., the Copenhagen criteria).

2) The EU does not play a neutral role when it leaves exponents of its declared values to confront illiberal governments alone. It is complicit, abandoning its natural allies. Lending the EU’s top-down support would help redress this structural imbalance. Placing civic engagement and political accountability at the center of a new enlargement policy would generate the popular traction and credibility that the current EU enlargement approach has long lacked.

3) Annual “Priebe reports” – independent assessments of Western Balkan countries’ adherence to EU foundational values and Copenhagen criteria – should become an integral element of the EU’s engagement, followed by active support to local independent constituencies to address structural weaknesses identified. These would provide connective tissue between civic advocacy to end state capture by corrupt elites to institutional rule of law and democracy and the Union.

These are initial recommendations for what needs to be an ongoing exercise in honest analysis and diagnostics. Yet these are key first principles that, if internalized, could help to strengthen both the EU and future member states.