They shouldn’t have to be heroes

Home They shouldn’t have to be heroes 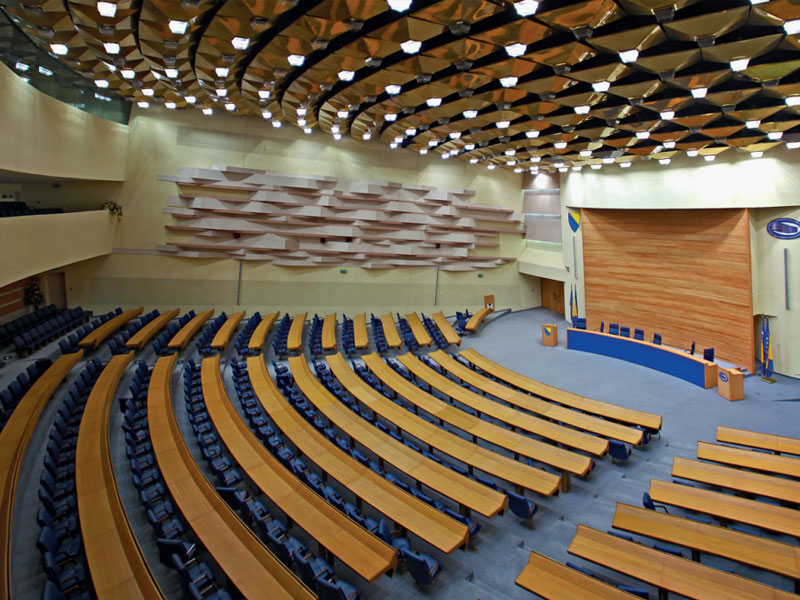 They shouldn’t have to be heroes

A few days ago, on November 20, we were each sitting in the large main assembly hall in the Parliament building in Sarajevo. The EU had convened a meeting to discuss the rule of law and the judiciary in BiH. However, an observer who hadn’t seen the agenda would have been excused for thinking the topic of the event was corruption, as that was the topic on the minds of the participants for the bulk of the 5-hour event.

As far as these events go, there were some nice surprises. The citizens and civil society representatives attending were vocal, clear, complementary and often supported one another with applause. With the exception of some visibly uncomfortable – or outright dismissive – representatives of the country’s judicial institutions, every person in the hall was in full agreement on the problems with the judicial system in BiH – the inefficiency, the inequal access to justice and the lack of independence at all levels. Unfortunately, while there was wide agreement in describing the problem, there was little opportunity to analyze the structural drivers of the malady, or to look for solutions that could help alleviate the problem.

Zoran raised a question for the first panel on the topic of whistleblowers and their protection, noting a case from 13 years ago. In 2006, Želimir Rebac, former Director of Customs Administration of the Federation of BiH, committed suicide by jumping from a bridge in Mostar into the Neretva river. In his own words, in the last years of his life, he and his family members had been receiving very explicit death threats because he had filed numerous reports on tax and customs fraud against the leading Croatian politicians and businesspeople, breaking the omerta, reporting “his own people”. The case was quickly forgotten, and the same people still control the Ministry of Finance and Ministry of Justice at the level of Federation of BiH and the state level. (For years, finance and justice responsibilities have been consistently given to HDZ (Croatian Democratic Union), as their part of the “deal” of power sharing.) While no specific answer was given in response to Zoran’s question, this did put the issue of whistleblowers on the agenda, and prompted a few other people to add their reflections on the topic as well.

It was not lost on Valery that, while this discussion was going on, the sun was rising on a Washington, DC preparing for another day of testimony in a presidential impeachment hearing that was prompted by a whistleblower complaint. Through a flood of depositions, written statements, document discovery and sworn testimony, a story has been told of US presidential pressure being applied against the President of Ukraine in pursuit of a personal political gain, rather than in support of considered and deliberated official American foreign policy. The evidence that has been revealed to date has been substantial and mutually reinforcing. It remains to be seen what will be the final findings and outcome. But the investigative process was initiated due to the existence of whistleblower protection mechanisms specifically intended to provide public servants with the ability to flag issues of grave concern that they may see in the conduct of their day to day duties.

Most troubling are the calls – predominantly by President Trump’s most ardent supporters – to reveal the name of the whistleblower. These voices claim that it is only fair that Trump can face his accuser. However, the documentation that has been collected renders any further role by the whistleblower redundant. He should be able to continue his professional service undaunted, having exercised his rights in an organized and institutional system. The system is meant to protect individuals, while opening the doors to investigation.

While procedurally the process has unfolded more or less as intended, it remains to be seen if the whistleblower protections will be respected. If they are not, and if congressional, party or independent actors seek to widely unveil the identity of the whistleblower, then yet another American norm will begin to degrade, along with a critical mechanism aimed to root out and control for institutional governmental wrongdoing, malfeasance, self-dealing and blatant corruption.

This is all highly relevant to and for BiH, in general and in light of recent discussions on the rule of law that have been held in anticipation of the release of the so-called Priebe report, likely to be published before the end of the year. This report, on the state of BiH’s judicial system, is intended to shine a light on the reforms needed if BiH hopes to continue to pursue its stated EU membership goals. One can expect – from past judicial sector reports as well as the debate on November 20 – that a large chunk of the report will indeed be related to corruption.

A Whistleblower protection law was adopted at the state level in 2014, and in the Republika Srpska in 2017; a similar law has remained in legislative procedure of the Federation of BiH since 2018, but has not yet been adopted.

While a shaky initial framework for whistleblowers has been put into place, there are many weaknesses and challenges that have yet to be addressed. All three laws have many limitations in defining who, when and how an individual can become a protected whistleblower in Bosnia and Herzegovina, whether in the public or private sector. And, even if they are de jure protected, who will protect their families from retribution? Who will powerfully represent them in the court? Who will provide the psychological help so often needed when suffering sustained pressure and intimidation? These unresolved questions explain why the history of whistleblowing in Bosnia and Herzegovina registers very few names of these bravest men and women. Tragically, out of these few, some were killed, have committed suicide or died of stress-related illnesses.

As liberal democracy continues to be battered by illiberal forces globally, the events of November 20 were yet another sign that the challenges facing citizens who seek accountable, rights-based, participatory democracy are substantial, but are shared, and that reinforcing formal and informal networks of advocates and experts is necessary to ensure effective implementation and strengthening, on both sides of the Atlantic.

Whistleblowers can’t and shouldn’t be heroes. Reporting a violation of the law, testifying to war crimes, seeking to protect public assets and preventing further deterioration of democracy at the local and global levels can and should be an easy and risk-free endeavor.

Valery Perry is a Senior Associate with the Democracy Policy Council. Zoran Ivančić is Founder and President of the Public Interest Advocacy Center Sarajevo, and a communicator, producer, fixer and activist at large.